In the film blowing machine, the extrusion process of blown film or tubular film is the most common method of making films, and is generally used to manufacture thermoplastic plastic bags. More than half of the films produced today are made of polyethylene , mostly has low density. The polypropyleneIt is another of the widely used materials. The term "film" refers to thicknesses less than 0.5 mm. Thin films are used for packaging material (wraps, grocery bags and garbage bags); Thicker film applications include covers and coatings, for example pool covers and coatings for irrigation channels. 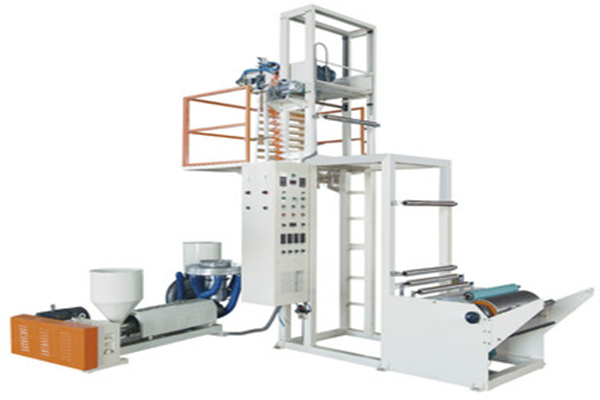 In the blown film machine, the extruder is equipped with an annular nozzle, usually facing up. Air is injected into the interior of the nozzle, and the nozzle is confined inside the material and is accommodated by a pair of rollers (folding rollers) located at the top. At the exit of the head, the material is suddenly cooled by a forced air flow that passes through the toroidal chamber (cooling ring) and is guided concentrically and evenly over the bubbles.

If the flow of the air is not well regulated or is not concentric with the bubble, a variety of thicknesses occur which lead to the formation of corrugations. The quotient between the diameter of the bubble and the diameter of the nozzle is called the explosion ratio or blowing ratio and is usually in the range of 2.0 to 2.5.

The cooled film passes through the guide plates (basket) and collapses between two pulling and collapsing rollers, passing through other rollers that serve as a guide, then moving to the storage drums (reel rolls), where the coils are collected.

In the winding roller of the film blowing machine, a series of rollers are arranged that prevent the formation of folds which are called guide rollers.

Between the trawl rollers and the winding rollers are generally available the systems of treatment and elimination of static charges formed by electrically conductive brushes with grounding that rub against the surface of the film, already collapsed, in order to eliminate static current.

Most commercial systems are provided with twin storage facilities, so that a full drum can be removed without stopping the production process.

In some cases, by blowing, the material expands up to three times its original diameter, and at the same time is stretched by the rollers that are in the upper part, so that it is oriented biaxially. The material leaves the nozzle in the molten state, but as it rises it cools, thanks to the air current that circulates on the outside of the bubble, so that it solidifies, "freezing" the orientation in both directions, axial and longitudinal. The solidification point is usually easily appreciated due to the loss of transparency of the material when passing from the amorphous to the crystalline or semicrystalline state. This process is known as "bubble stabilization".

Our happy customers who drive us to continuously improve.
Read More